Why Obama won’t (or can’t) protect us 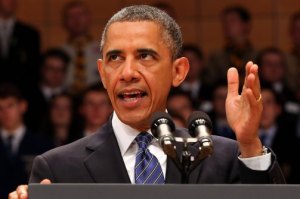 What is President Obama thinking?

Both supporters and detractors of the president struggle to rationalize his approach to the threat of global jihad. Why can’t he call it what it is? Why does he discount the religious underpinnings of Islamist terror? Why does he lecture the American people about the “root causes” of “violent extremism?”

The answers matter because the West is losing ground in this battle. While the U.S. government fails to orchestrate — or even articulate — a coherent strategy to combat the followers of radical Islam, their population, political power, and capacity to harm us surge.

The simplistic explanation is that President Obama, like President Bush before him, fears alienating the millions of Muslims who forswear violence. He uses politically correct language to avoid adding fuel to the fire. Were this the only rationale, we might take comfort that he understands the crux of the problem. We might assume he is choosing his language as a calculated tactic.

Obama’s choice of language is more than rhetoric, however. He really seems to believe what he is saying. And initially, at least, we might have attributed such naiveté to his personal history. After all, the president can claim little “real-world” experience outside of politics. A community organizer and college professor before entering public life, he never had to manage a large organization or meet a payroll, let alone address matters of national security.

The record reflects as much. Since he came into office, Obama has presided over geopolitical disasters across the Middle East and elsewhere around the globe. Yet none of these failures appears to have chastened him. Surrounding himself with loyalists, the president presses on with a doctrine of vague declarations and non-intervention, unbothered by the diminished credibility of America among both allies and adversaries. So something deeper must be at play in the president’s political philosophy.

It comes down to ideology. Barack Obama is a product of the progressive movement and its champions in liberal academia. This community embraces a rigid view of the human condition, where race, wealth, and power engender social divisions and perpetuate oppression of the weak. In its paradigm, most conflict, poverty, and social dislocation result from avaricious capitalist and corporate interests. Only enlightened governments and intergovernmental institutions can restrain these interests and rectify the imbalance.

There’s no room in the progressive model for baser pathologies such as tribal enmity or the medieval barbarism of the Islamic State. Progressive thinkers simply deny or overlook historic events and present-day behaviors which fail to align with the patterns of race and class warfare they deem universal. For this reason, activists in the 1980’s raged over the racial injustice of Apartheid South Africa while completely ignoring the vicious brutality of the African National Congress and of black-ruled regimes in neighboring Zimbabwe, Mozambique, and Angola. It’s why the supposedly liberal advocates for Palestinian independence today pay no mind to the illiberal treatment of journalists, Christians, women, and gays in the Palestinian territories.

Viewed in this light, it’s not surprising to hear President Obama and his team focus on the economic deprivation across Muslim societies, as if a jobs program would stem the tide of radical Islam. President Obama may not “blame America first” as his most ardent critics assert, but he eschews the notion of American exceptionalism. At the National Prayer Breakfast last month, he admonished Americans and Christians, “lest we get on our high horse… remember that during the Crusades and the Inquisition, people committed terrible deeds in the name of Christ.” As far as he is concerned, the moral deficiencies of Muslim and Arab societies are not materially different from the imperfections of Western societies.

If we are all one imperfect world laboring under universal burdens of sin, then of course there is no point in singling out radical Islam. To combat our enemies, we must combat ourselves and do penance for our own failures. In Obama’s warped alternative reality, NATO defense of Eastern Europe is the source of resurgent Russian aggression, global warming is the most urgent threat to humanity, high unemployment in French suburbs is the “root cause” of anti-Semitic rampages, and Jewish settlements in the West Bank are the obstacle to Middle East peace.

President Obama never truly concealed this radical mindset during his pursuit of the White House. He was mentored by the likes of Bill Ayers and Jeremiah Wright. Their ideas were on clear display for anyone who chose to look closely. With two years left on the president’s term and critical military and security policies still in flux, the public should wisen up to a fearful reality. The man charged with leadership of the free world is not equipped to address the clear and present dangers to our civilization.